As I recall FELLA's met at the Corinthian Yacht Club in Tiburon, Elks Club in San Rafael and ﬁnally around Cordelia, CA. The gathering had a robust roster and grew to around 100 attendees and was moved to Cordelia to accommodate travel for FELLA's coming from distant parts of CA. Some of the early gatherings may have provided some kind of entertainment like a magician or something but I can't be sure. As "Big Frank" became weak and was no longer able to continue the organization of the gathering, he searched for a FELLA to take over. He worried about its sustainability and no one was willing to grab the reins. As I recall the Chief of Vallejo (I think) agreed to take over and all information was transferred to him. Both the Vallejo Chief and "Big Frank" died close together in time, and I have no idea if FELLAs survived. The last FELLAs meeting I'm aware of would have been around 2009?

Bob Sousa and Steve Bogel would be good resources to address the ROMEO's history. I have no doubt that ROMEOs and FELLAs have Frank J Busher's ﬁngerprints on them.  Best, Jeff" 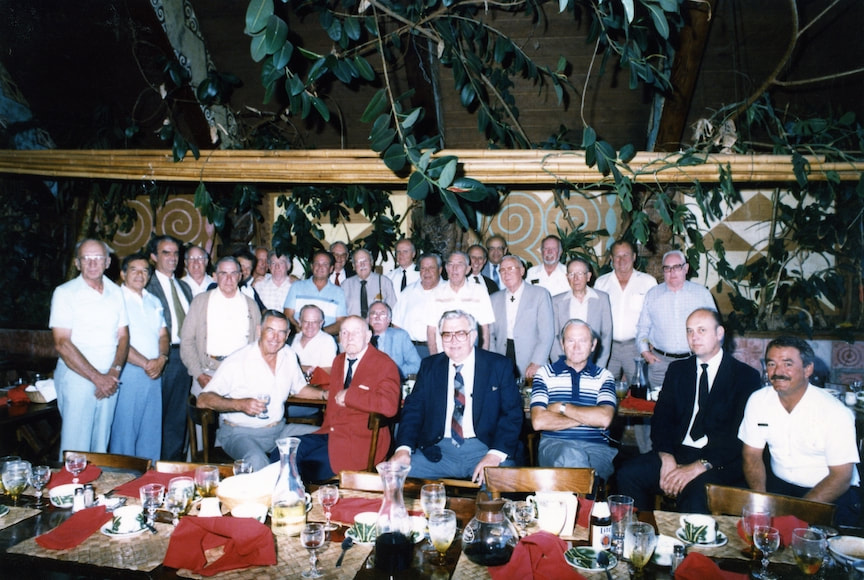 This photo was taken of retired chiefs at a FELLAs gathering organized by Frank Buscher at Tiburon Tommies in the 1980's. "Bob Souza and I were there as staff members to Frank," said retired Sausalito Chief Steve Bogel. The photo was taken by retired Chief Carl Heynen of Alto.
PLEASE HELP Identify those in the photograph above:
According to retired Sausalito Chief Steve Bogel, this was taken at an early gathering of the FELLA's group that Tiburon Chief Frank Buscher organzed for retired members - Fire Executives of Long Long Ago. The photo was taken by retired Alto Richardson Bay Chief Carl Heynan, and the event was held at Tiburon Tommies. Retired Tamalpais Valley FPD Chief Bob Souza, pictured seated on the far left,  thinks it was about 1979-80. 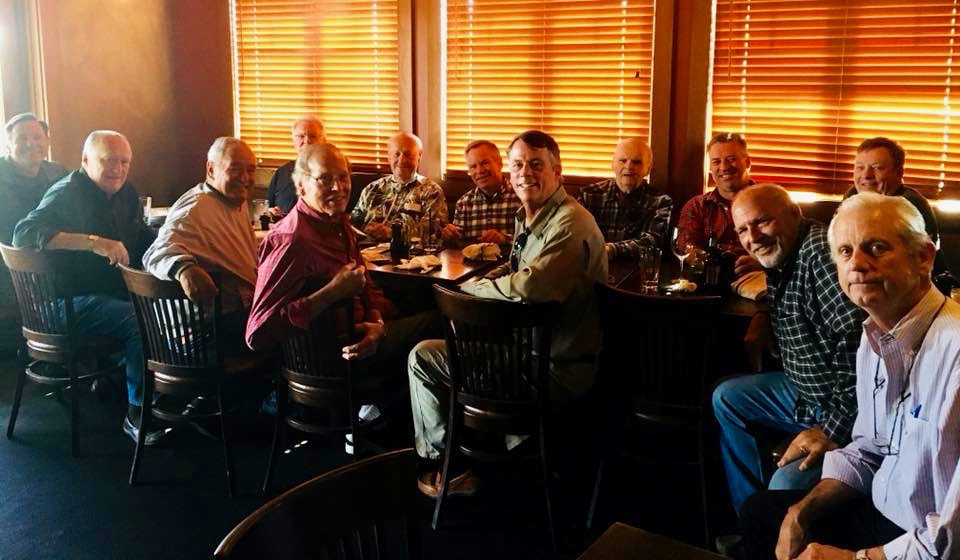 Another shot of the group at lunch on November 1, 2017 at Wild Fox in Ignacio. Doug Archer, retired Deputy Chief of Larkspur is on the far right, and was not in the photo taken of this group out front, top of this page. 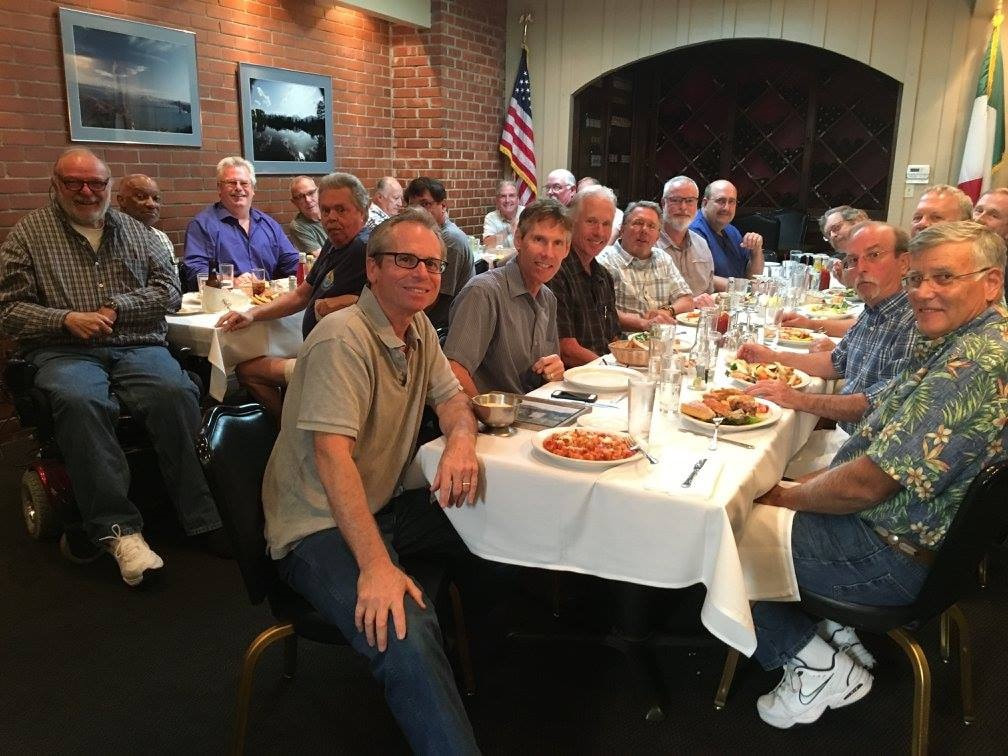 We meet every three months for lunch. Usually in January, April, July, and September. Normally we go to Marin Joe's, but occasionally we will go to San Rafael Joe's. For one of the summer lunches, retired Chief Ken Massucco organizes a BBQ at Samuel P. Taylor State Park. For this lunch, spouses are invited to attend. Also, occasionally retired Senior Captain Pete Martin will invite us to join him for lunch at the Corinthian Yacht Club in Tiburon, where he is a member.

I pick a date a month in advance and email it to all the guys in my address book. Then send out a reminder and RSVP a week before. We usually have 15 to 20 show up for the regular lunch, and double for the BBQ. There are several on my list who we never see or hear from. I also use the contact list to update everyone on any department related news or activities that I hear about." 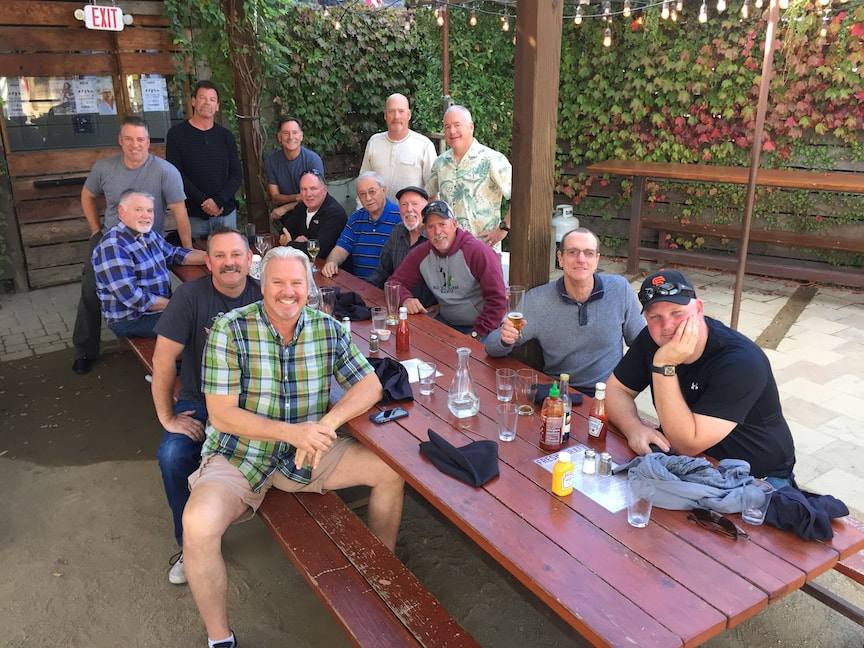 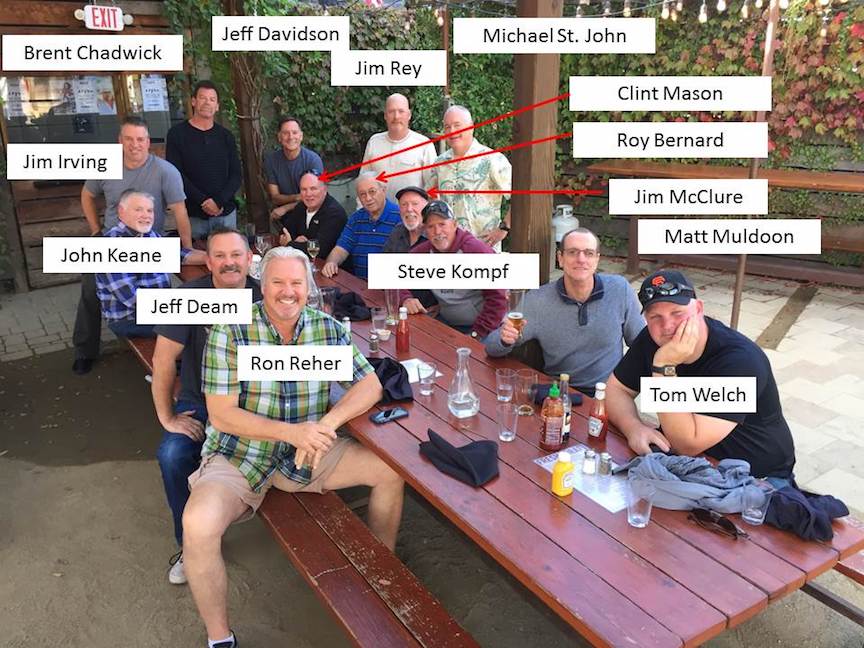