Convict S. J. Frooman was killed in 1909 while fighting a huge fire in the Jute Mill at San Quentin State Prison. Research is underway for more information.

"...Under his administration his prison officials seem to take much the same position. For instance, when the warden was up at Sacramento something over a year ago the big Jute warehouse down on the water front outside the wails took fire one morning. It was a terrible blaze — on a wharf, under the hill, out of range of gatling guns, etc. The convict fire brigade and several hundred other prisoners were taken out and sent to fight the fire.

In all 600 men — some of them decidedly dangerous men if handled as such men are usually handled — risked their lives to extinguish the thing. One convict fell from a burning beam and lost his life. Some 20 or 30 were overcome by smoke and had to be carried by their comrades to the hospital.

All the time it was like all fire fighting — men rushing hither and thither, bawling orders, breathing stifling smoke, plunging into wreaths that hid them, moving swiftly always — vast confusion — 300 convicts out at once and possibly 20 guards — all the guards being kept as busy as the convicts. And when it was over every one of those prisoners went back to his cell tired out, some of them utterly exhausted, many badly burned, others with lungs sore from smoke.

They went back to their cells and no one but did it; none tried to escape. There was another occasion when six men upset a boat out in the bay. A number of the convicts were allowed to strip and swim out in an attempt to rescue them. And that night convicts dived for hours to recover two of the bodies. The convicts themselves, are the ones— who like best to tell of these incidents. They seem to hold a sort of pride in them. A sort of pride is a fine thing to produce esprit de corps. Esprit de corps sounds queerly when one is talking about a prison."
See below - Retired Larkspur Fire Chief and Historical Committee member Bill Lellis discovered the convict's name in April of 2016 through newspaper research. Note also that Larkspur FD responded mutual aid - a thank you letter from San Quentin to Larkspur will be posted soon.

Brave Man in San Quentin Fire to Get Private Burial

SAN QUENTIN. March 5.— An honorable burial, the reward for an honorable death, will be accorded S. J. Frooman, a convict who died in the prison hospital this afternoon from Injuries received while bravely fighting the fire in the penitentiary last Wednesday.
Frooman, displayed a reckless gallantry during that exciting period. When the call came for volunteers he was among the first to step out. It was his one opportunity to retrieve his dishonored name, to clear himself of the taint of a criminal being, to take his place as a man among men. It was his chance and he took It. For a few moments he lifted himself from out the slough of his debased position and then died. While yet he lived in honor a merciful Gatling gun fell upon him, crushing him to his death.

He lived in dishonor, but died a man, and for his manner of death will be burled as a man. in San Rafael cemetery, not as a criminal in a convict grave. This will be the only satisfaction to his wife and daughter, who are in Europe and unaware of his crimes and his death. He was convicted for forgery and would have been released in 1911. The' expenses of his funeral will be paid by the guards of the  prison. Evidence of the fire-which occurred In the Jute Mill of the prison Wednesday has disappeared. The bundles of jute ceased to smolder this afternoon and the convicts have been spreading the water soaked and  partially burned material In. the prison yard. Warden Hoyle declared tonight that the loss will reach $40,000.

S. J. Frooman,  the convict who broke his leg and was otherwise badly crushed while fighting the fire that threatened the destruction of the state penitentiary here last Wednesday, died today as a result of his injuries. Frowman was injured while dragging a gattling gun out of the flames."

Note from Editor: The Gatling gun (proper spelling) is one of the best-known early rapid-fire weapons and a parent of the modern machine gun. Invented by Richard Gatling, it was first used in the 1860’s by the Union Army during the Civil War. 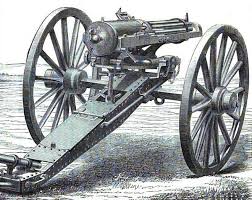 A Gatling gun used in the Civil War mounted on a cart. The San Quentin one was probably mounted on a tripod.
​The document below is from the annual report to the State from the Prison Directors covering the years 1909-1910. This excerpt of four pages includes the San Quentin Warden's Report, and the San Quentin Captain of the Guards Report. While the fire and death is described, the convicts name is not written in the report. SCROLL Through Document Below to read the cover and four related pages.