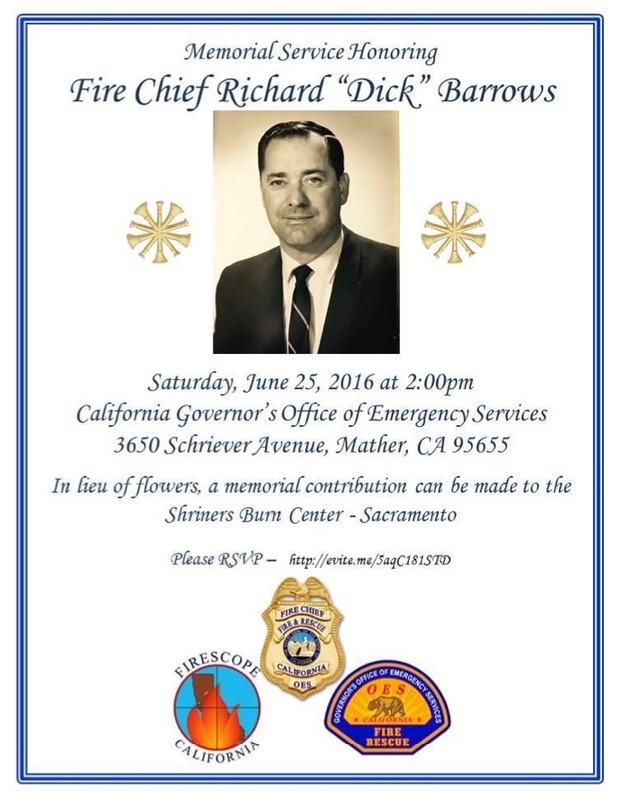 Prior to his California Governor’s Office of Emergency Services employment, he was employed by the Citrus Heights Fire Protection District as a firefighter from 1948 to 1950, and then employed by the California Division of Forestry from 1950 to 1962 as a Battalion Chief/County Fire Training Officer in San Bernardino County. Richard also served in the US Army in Germany as a Chief Infantry Operations and Intelligence Specialist.

​A memorial service will be held in Richard’s honor on Saturday, June 25 at 2:00 p.m., at the California Governor’s Office of Emergency Services, located at 3650 Schriever Avenue, Mather, CA.  In lieu of flowers, a memorial contribution can be made to the Shriners Burn Center in Richard’s name - one of his favorite charities. He is survived by his sister, Jackie Walton and her sons, Jerry Wilkie of Sacramento, CA, and Richard (Norma) Wilkie of Rocklin, CA, and her daughter Patte (George) Cunningham of Reno, NV, including several great nieces and nephews.He is also survived by his nephews Steve (Diane) Harding of Sedona, AZ, and Mike (Sarah) Harding of Burnt Ranch, CA, and their brother Rick Harding (deceased). Richard, along side their aunt Patsy, took Mike, Rick and Steve into their own home after their mother died in 1959 and helped to raise them.

June 14, 2016
"My precious friend.. I will miss you so much. I will miss our talks, lunches at Olive Garden... and so much more. You meant so much to me and my heart is broken. I will miss your stories, humor and hugs. You made a difference in this world! I love you Dick!"   Michelle Craft, Rancho Murieta, California

June 12, 2016
"Dick was a good friend,seems like I have know him all my life,actually I have! rest in peace Richard say I know you and daddy are having a great discussion."   Sharon Ulrey, San Antonio, Texas

June 09, 2016
"Dick and I worked together years ago at the CDF San Bernardino HQ station. When he departed for the OES Fire-Rescue job in Sacramento he left a big void. He was a real pleasure to work with. RIP my friend!"    Norm Silver, Vacaville, California

June 08, 2016
"Richard was a great man. The death of a loved one is so devastating and not always easy to get through alone. I found Phillipians 4:6-7 helps because we're encouraged to turn to God in prayer and He will give you peace and understanding as you endure this difficult time."    Kimberly B,, Los Angeles, California