The History of the Homestead Valley Fire District, 1940-1962

In the early years when the area was very rural, Homesteads' fire protection service came from the Tamalpais Forest Fire District (TFFD). In 1940, Ove Johnson watched helplessly while his home at 235 La Verne burned to the ground. The TFFD fire fighters had responded to the call, but they were not trained or equipped to fight structure fires. They were there to prevent the fire from spreading onto grassland and forest, as that was their mission. Ove was furious. He did something about this sad state of affairs. After rebuilding his home, he bought an old Hudson truck. He and five friends refurbished it as a fire truck. In an emergency Oves' wife sounded the siren on top of their house. The volunteer fire brigade then rushed to the Johnson garage where the truck was stored, started up the fire truck and sped off to the fire.

In 1950, Mrs. White, who owned a lumber yard, gave the firemen all the lumber they needed to build a firehouse. She also sold them the lot on the corner of Evergreen and Melrose for $100. Dirt from excavating for a school expansion across the street was used as fill over a culvert for the creek. Lee Holden, a contractor, built the firehouse. A dance was held there on New Years Eve in 1950, see the photos above,.

In 1962, paid firemen were hired, no more volunteers and the Homestead Valley and Tamalpais Valley fire departments merged. In 1972 two new bays were added to the building. In 1980 the firehouse was closed. Through a joint powers arrangement, Homestead was served from firehouses in Mill Valley and Tam Valley. The Homestead firehouse was rented as a residence.

In 1989 the Loma Prieta earthquake damaged the old firehouse severely and it was demolished. With financial help from the Homestead Valley Land Trust to pay for a landscape architect and materials, volunteers developed the site into a park. Volunteer Park was dedicated in 1992. The Land Trust leased the park from the Fire District for $1 per year.

In 1993 the joint powers agreement between Mill Valley and Tam Valley fire departments was voided. The Tamalpais Fire Protection District decided that a fire station must be located in Homestead Valley. In 1994, a temporary solution was found. Two firefighters were housed in a home on Evergreenóan ambulance and a fire truck were parked in the yard next to the house under a temporary canopy.

In 1998 detailed engineering and architectural plans were developed for the construction of a new firehouse on the site of Volunteer Park. This project was abandoned in 1999, when the Southern Marin Fire Protection District was formed by merger of Tam Valley FPD and Alto-Richardson Bay FPD's. A new arrangement was made for Homestead Valley to be served once again from the Mill Valley and Tam Valley firehouses.

Click here to go to the Homestead Valley Community Association History Site
Editors note: The Tamalpais Forest Fire District, not to be confused with the Tamalpais Fire Protection District, existed from 1917-1941. The Marin County Fire Department was formed in 1941, using the TFFD as the foundation in unincorporated areas in Marin, but expanding the mission to include all types of fires and other emergencies.
Click here to go to the Tamalpais Forest Fire District History Page 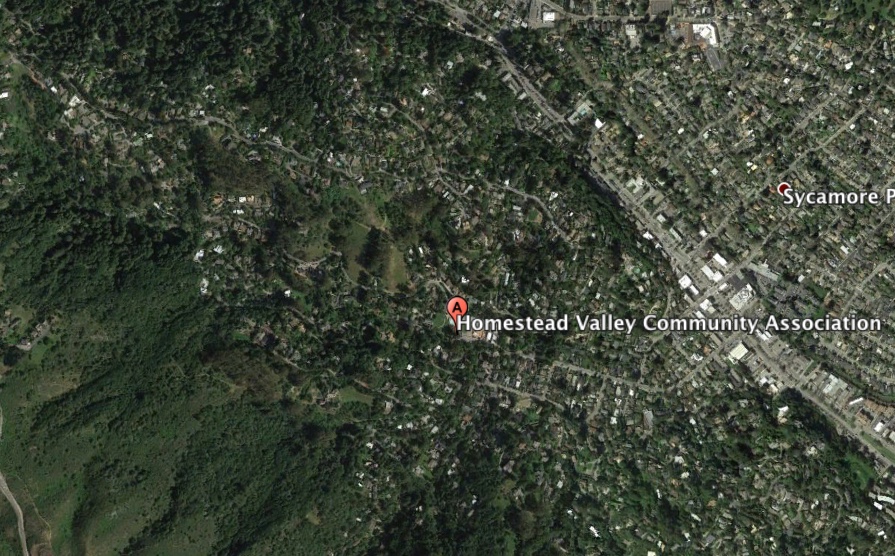 Homestead Valley is an unincorporated area of southern Marin County primarily in the watershed of Reed Creek.
In 1903, the Tamalpais Land & Water Company issued a subdivision map of Homestead Valley and started selling lots and larger blocks of land. This was the beginning of the community that celebrated its Centennial in 2003.

​The community today consists of about 1000 homes, and has over 80 acres of publicly owned open space.  It is surrounded by the city of Mill Valley, the Golden Gate National Recreation Area and three unicorporated areas: Almonte, Tamalpais Valley and Muir Woods Park.