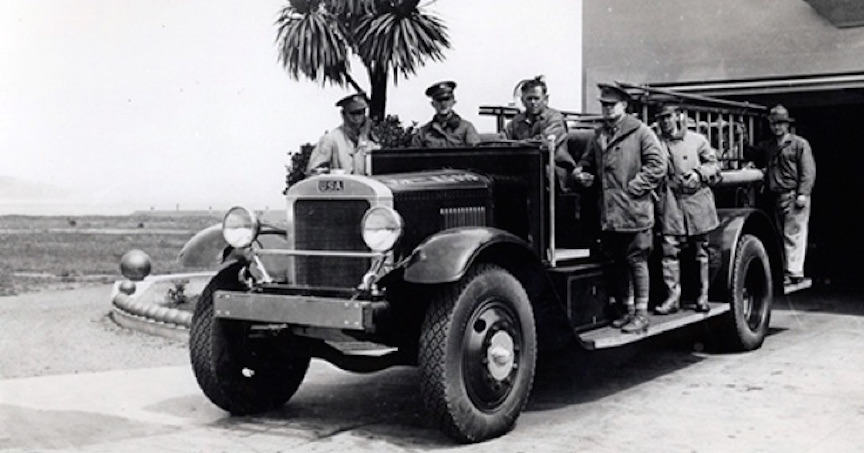 Tucked away in the northeast corner of San Francisco is an old Army town, its forts and buildings dating back to 1776 when the Spaniards first built a fortification overlooking the South Bay. Since this time, the Presidio, Spanish for Garrison, has proudly flown the flags of three countries, Spain, Mexico and since 1846, that of the United States. By the turn of the 20th century, the Presidio had grown into a complex assortment of buildings, barracks, homes and even a cemetery. Although hundreds of soldiers were garrisoned here in the wood frame barracks and Army officers resided in fine homes on “officer’s row,” one building that had been left out was a manned fire station.

As with most Army posts of the time, fire protection consisted of hose carts, ladder wagons and an occasional steam fire engine, coupled with the brute strength of hardened soldiers who did their best to save lives and property when the alarm of fire was sounded. By 1915, several people had perished in fires at the Presidio, but little had been done to improve fire protection. However, that was about to change. On the morning of August 27, 1915, a fire started by hot coals, quickly spread through the double officer's quarters occupied by the family of General John “Blackjack” Pershing, one of the most notable officers in the history of the United States Army. Although valiant attempts were made to save the General's family, his wife, Frances, and his children, Helen, Mary and Ann all were killed in the blaze. Only his five year old son, Warren survived, pulled out by the family’s elderly servant, Johnson. Change came quickly, as the tragic fire was immediately investigated by U.S. Senator Francis Warren, who was the father of the late Mrs. Pershing.

In just twenty four months, a full–time fire department was created and opened for service in 1917. A fine station was constructed at 63 Keyes Avenue. In no time at all the Presidio Fire Department (PFD) distinguished itself as one of the best fire departments in the U.S. Army. Over the years, the PFD had become a first responder for incidents on the Golden Gate Bridge, ranging from accidents to high angle rope rescues. At 5:04 PM on October 17, 1989, the Loma Prieta earthquake hit the San Francisco Bay area and the PFD responded first due to finding several blocks of wooden buildings on fire just outside the confines of the Presidio. The PFD was on scene alone for quite some time, while the crew not only attempted to fight the fire, but perform hasty searches of the collapsed buildings in the vicinity.

In 1994, the base was closed through the Base Realignment and Closure (BRAC) procedure, and operation of the department fell to the National Park Service. This marked the first and only full–time fire department in the U.S. National Park Service. The PFD responded from two stations, one in the Presidio proper and the second across the Golden Gate Bridge, in the Marin Headlands. This department prided itself on rapid response to not just structural fires, but motor vehicle accidents, cliff rescues, bridge emergencies, medical emergencies and a myriad of other challenging operations.

Today’s National Park Service fire department is made up of 49 fire stations at 22 national park sites that have fire suppression and all–hazard response capability. The NPS supports 67 structure fire engines. All other NPS units rely solely on aid agreements to meet these emergency response needs. All of the approximate 220 employees are certified by NPS standards to safely mitigate many types of emergency situations and in almost every location provide this same service to communities outside the park boundaries also through aid agreements.

In July 2012, the Presidio FD was restructured and all fire protection operations were absorbed by the San Francisco Fire Department, in the Presidio. Station 2 in the Marin Headlands converted to a standard NPS structural fire operation. Economically and strategically–driven, the new fire operations began on July 12, 2012.

The ending of any proud moment in history is always looked at with sadness and nostalgia, but when a fire department closes, it is viewed with the added remembrance of pride and reflection of a long career of dedicated firefighters and paramedics who have made an untold difference in countless lives for nearly a century.