The following information is from the Library of Congress Historic Buildings Survey completed before the fires and eventual destruction of the building.

"The Old Marin County Courthouse, built in 1872-1873, housed all of the county offices, courts and jail, until 1969 when the last offices were moved to the new county civic center. The two story and basement brick building was designed by the pioneer San Francisco architects, Henry Kenitzer and Edward T. Raun, who had arrived in California during the Gold Rush. The courthouse was one of the last public buildings to be built in California during the late Greek Revival period, employing the Corinthian order. With the longest recorded history of any California county, dating from Cabrillo's visit in 1542 and that of Captain Francis Drake in 1579, Marin's historic sites and structures have suffered more through the ravages of time, fire and destruction than those of any other section of the State.

The old County Courthouse in San Rafael remains one of the few existing buildings linking the present with the County's heritage of the past. In 1817 Mission San Rafael Arcangel was founded in a sheltered and secluded spot fifteen miles north of the Golden Gate. It was established as an asistencia of Mission San Francisco Asis (Mission Dolores) to car for victims of a pestilence that had broken out among the converts of that Mission. With the secularization of the missions in 1834, San Rafael Arcangel became the property of the Mexican government and was sold at public auction in 1845. Marin County was incorporated on February 18, 1850, at a time when a bitter fight was being waged in Congress over a bill to admit California as a state, President Taylor and a majority of the Democratic Party favoring retention of the territorial status.

The bill was finally passed at a third reading but by no means unanimously; there being 150 ayes to 56 noes. President Taylor died on July 9th and the then Vice-President, Millard Fillmore, succeeded to the Presidency. Fortunately, Fillmore favored the inclusion of California and when the bill went to him, he approved and signed it on September 9, 1850; California becoming the 31st State with Marin one of the original 27 Counties, and San Rafael the County Seat. The first reference to it as such is in Meret's Chronolgoy where, in 1851, San Rafael is referred to as the "County Seat." As the County has grown in population and development, Marin, in common with many of the other California Counties, has undergone various changes in political subdivisions, townships, school districts etc. but San Rafael has always remained the seat of County government. The need for a County Building and lock-up had been met in 1851 by converting one of the old mission buildings into a "juzgado" (Hoose-gow) for this purpose, and so it was used until 1853. In that latter year the courts were transferred to an adobe, built and formerly owned by Timothy Murphy, a pioneer settler in the county, and there they were held for the next twenty years."


NOTE: the story of the fires will be added soon. 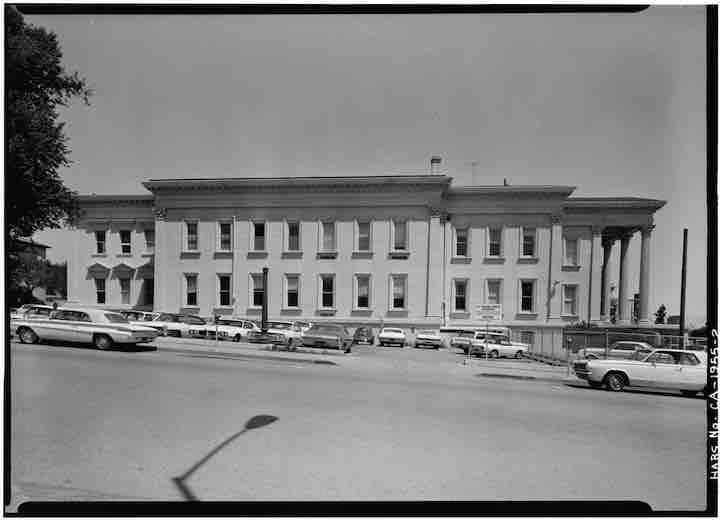 Photo from the Library of Congress, Historic Buildings Survey