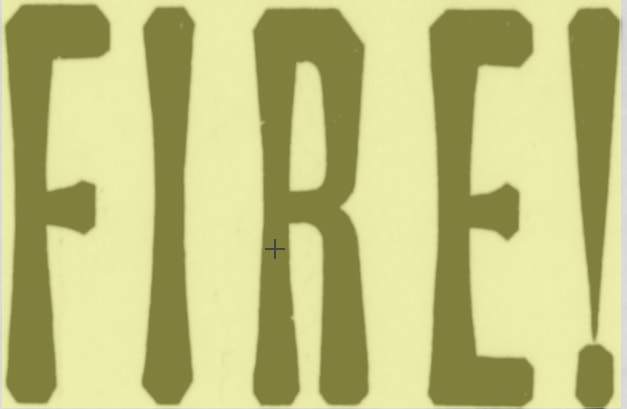 Most likely cause of this huge fire? Fireworks.

Most of the Business Portion of the Town Consumed by the Destructive Element.

The Fire Did Not Start from the "El Monte" Fireworks, as Stated in Wednesday's Examiner.

Scenes and Incidents During the Great Conflagration.

The Fourth of July was duly celebrated in Sausalito. It was a jovial day for some, but a gloomy one for those who lost their little belongings, and who will have to start anew. It was about twenty-minutes to 10 o'clock last Tuesday night when the alarm of fire! fire! fire! was distinctly heard and the building, George Ginn's saloon, the "Hunter's Resort" was in flames, bursting out of doors and windows in the upper story.

There was but little wind at the time; however the flames went northward on their message of destruction, tapping the bakery of the Grethel Bros. and across the alley to Joaquin Lacerda's building, occupied as a saloon by John Trinidad, thence to the Tamalpais Stable. Next came Manuel Barios building; on to the Lisbon House, again to Joe Lawrence's fruit store, where the tongues of flame reached the Tamalpais Hotel, a three-story frame building, Antone Figurado, proprietor, and in less than ten minutes the building was doomed.

Previous to this, to the south of the Grethel building, occupied by George Ginn, the light wind sent its flaming messenger in forked tongues to Cochran's plumbing shop, then to Jacques Thomas' two-story building, the upper part occupied by his family and the lower part as a barber shop, and, like the rest they were soon destroyed. To save the Hotel Sausalito, willing hands pulled down A. Brendeau's one story shanty, and another serious loss was averted.

The Yacht House, Peter Claudianos, proprietor, with the assistance of railroad hands and others saved the building on the East side of Water street, near the railroad wharf.

Nearly a thousand people witnessed the fire. Commodore C. C. Bruce did excellent service. Bruce lost an axe belonging to his yacht, the Rover. George Ginn lost all his wearing apparel, a valuable Native Son's badge and his dog "Budge." George, however, has his cash register. Ginn's loss is over $1,000. Loss of the Tamalpais Stable, $3,000. Phil Grethel's loss $2,400. Lisbon House $3000. J. T. Cochrane's loss about $400. C. T. Friedlander was there and did not mind a ducking. Ned Mandeville faced the hose and nobly did he stand his ground. Ned lost all his wardrobe.

Mayor J. W. Sperry was on hand. Counsellor Reade stood by his post of duty, even if he did soil his trousers.
Poor Uncle Joe the boot-black claims to have lost $40. A. Brendeau's loss amounts to a few hundred dollars.
The Grethel Bros., suffer considerable loss that will take some time to redeem. Pedro, the shoemaker is the loser of considerable stock. Jacques Thomas, the barber suffered a severe loss, as he had only just finished moving and improving his building. His little boy Harry found his money bank with his savings of $6. Mr. Thomas loses a watch and some finger rings, that were lost during the removal of his furniture. He is insured for $1000 loss about $1800.

Frank Juckich's the restaurant keeper loses four hundred dollars.Manuel Barrios loss is heavy. The barber shop next door was almost a dead loss, Joe Lawrence's loss is about $800. A number of roomers in the Tamalpais Hotel lost all their clothing. J. Trindad's loss amounts to several hundred dollars. The explosion of a boiler in the Tamalpais Hotel made quite a noise. The cover of the same was blown in front of the Hotel Sausalito, falling near some ladies.
​It was a narrow escape. The cover is now in the possession of John Dern of the Hotel Sausalito.

Mr. Coleman, Jacques Thomas' assistant barber had his bundle and ready for a swim to the city. Howard Avery, home for a vacation, made himself useful at the fire. Judge Simpton, Dick Garrity, Tom Frost and John Dern were on deck. Johnny Shane, an usual did some active service as a fireman.

The crew of the fire-boat Governor Markham from the city, although a little late, rendered good service. Supt. Shoemaker of the North Pacific Coast Railroad was on active duty until late hour and had his vigil eye on the lookout. Pap Shaw was out in full bloom and looked after his firemen. The railroad wharf and many cars were loaded with household goods.

Many articles carried out on Water street went up in smoke. The total damage by fire is estimated at about $30,000. Ten buildings were destroyed. There were many women who shed tears; even a man was seen to shed tears at his misfortune. John Schnell had a narrow escape; he was struck in the leg by a piece of iron from the bursting boiler at the Tamalpais Hotel. There are many who deserve praise for their laudable aid but the NEWS has not their names at this writing. A man had one of his wrists badly cut by broken glass. The charter of Seapoint Parlor No. 158, Native Sons of the Golden West, was burned in the fire.

It was an exciting night and one that will be called up, of no protection against fire for a lack of water and a fire engine."
​San Francisco Call, Volume 74, Number 35, 5 July 1893

"SWEPT BY FLAMES. The Heart of Sausaiito Destroyed. LEVELED TO THE WATER."

From the El Monte Hotel the Fire Was Blown Through the Business Part of the Town.

A disastrous fire broke out in Sausalito about 1 o'clock last night and swept from Slinkey's El Monte Hotel on the bluff, down almost to the water's edge, leaving only debris and charred timbers in its pathway. The fire was most rapid in its progress, being guided by the wind toward the bay.

As far as reported, no lives were lost, but at least three-quarters of the buildings in the pretty little town were destroyed, the loss being roughly estimated at from $50,000 to nearly $200,000. The Sausalito Fire Department is a limited affair and was unable to check the rush of the flames, so information of the fire was telephoned to this city, together with a request that a fireboat be sent over. At first the request was denied by Fire Commissioners J. Schmltt and Brown because they then deemed that the fire was too far from the water front for a fireboal to be of any service.
Later, however, the fireboat Markham was dispatched in haste, but arrived too late to lend any material aid in subduing the flames.

It is supposed that a spark from a skyrocket ignited the roof of the El Monte Hotel, where a small party was celebratlng with fireworks. The first intimation of the fire the celebrators had was when flames shot out from the roof of the hostelry. In a few minutes the whole structure was burning rapidly and the cry of "fire" spread throughout the town. Sparks from the roof were blown down the slope and quickly ignited other buildings.

The local fire company and a hastily organized Bucket-brigade were powerless to check the rapid onslaught of the devouring element. Everyone turned out, but by the time the fire reached the main level of the town they began to realize that all efforts to check the flames would be unavailing.

Then the residents began the removal of property from the houses in the pathway of the fire. They worked in great confusion, but considerable of the furniture and other personal effects of the families made homeless was saved.
​By midnight the fire had reached the railroad track, and there its progress was checked by the fireboat.

Only a vacant building on the lower level had been left standing. That was an old structure occupied as a restaurant. Only meager reports of the fire were received in this city, owing to the fact that the telegraph and telephone offices which were in the tract of the fire, were deserted before midnight. The wind blew from the north with considerable velocity, and the wooden structures were quickly lapped up. From latest reports it was impossible to estimate the exact loss, but it will be severe on those who were burned out, as it is said that they carried little or no insurance."
Epilog from Editor:

We've all heard the old saying "no good deed goes unpunished." It came from American Dramatist Clare Boothe Luce (Born April 10, 1903 - Died: October 9, 1987.) The phrase expresses the idea that beneficial actions often go unappreciated or are met with outright hostility. This was the case in the response of the Fire Tugboat 'Governor Markham' to Sausalito. Beyond the newspaper comment above that it arrived "...a little late...", San Francisco Fire Chief Dennis Sullivan would be criticized by the State Harbor Commissioners for sending the resource, which they felt left the San Francisco harbor and State assets unprotected. At that time, the fire tugboats were owned by the State, not the City, but were operated by the City FD.
This is analogous to having a State Office of Emergency Services engine today - it comes with conditions. The State also used their tugboats for non-emergency work including towing barges, and some dredging. See the article below.

​Less than a year later, the unresolved conflict over priorities came up again, during a fire at the SF waterfront.

"The Fire Commissioners and the Harbor Commissioners have had a falling out about the fireboat Governor Markham.
​During the Scott & McCord fire at the foot of Stewart street, on September 13, 1894, Harbor Commissioner Chadbourne ordered the fireboat away after all danger to the property of the State was passed. Since then there has been a disposition to take the fireboat away at all fires on the waterfront, and now the captain has received instructions not to respond to any fire alarms except when State property is endangered on the waterfront between Channel street on the south and Powell street on the north."

The 1906 Great Earthquake and Fire finally brought some resolution to the disagreement, and eventually the City FD owned their own fireboats. Chief Dennis Sullivan was killed during the 1906 earthquake, when building debris fell into the SFFD fire house where he and his wife lived. A fire boat was later named in his honor. 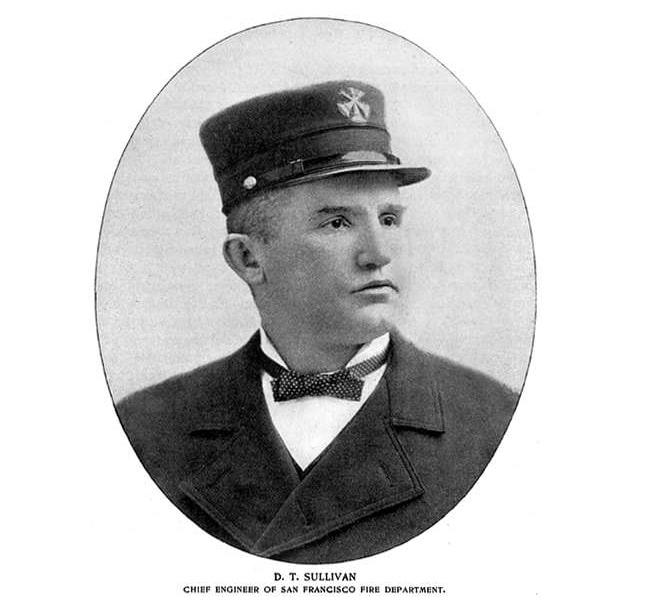