​The Larkspur Fire Department
including the history of the
​Larkspur Association of Volunteer Firemen, Inc.

Pictured: Larkspur's 1947 American La France pumper in Santa Rosa in September of 1953 for the annual California State Firemen's Association (CSFA) convention. John Raggio is driving the engine, and Loren Hall is in the officer's seat. Raggio would later serve as Fire Chief. Note the C.A.M. siren in front of the windshield, manufactured in Ross, California.
Chief Lellis's Book

The History of the Larkspur Association of Volunteer Firemen and the Larkspur Fire Department, are memorialized in retired Chief Bill Lellis's book at the bottom of this page. Use the button above to go directly to his book and also to watch the "Going on a Call" background and film posted February 28, 2016. 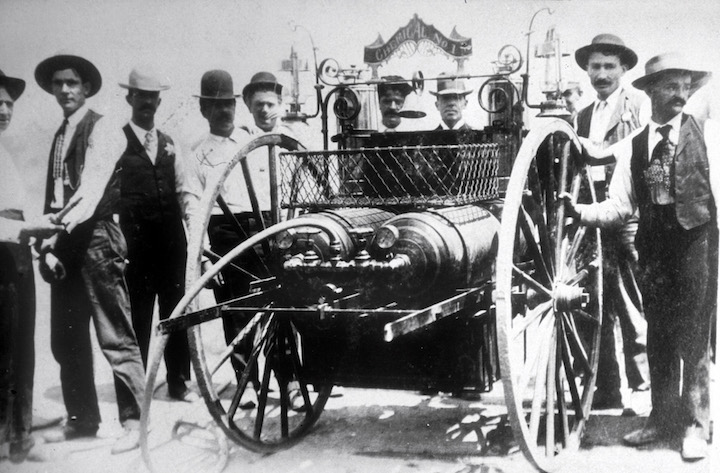 The Larkspur Association of Volunteer Firemen/FD, a brief history that will be expanded upon over time.

​The Larkspur Association of Volunteer Firemen (LAVF) has a long and proud history since its formation around 1908. In the beginning, the only equipment the volunteers had consisted of a hose cart and a bucket brigade, but no firehouse. By 1910, the volunteers were 24 strong and had a double chemical fire wagon and 500 feet of hose for the original cart, with a small fire storage building located along the railroad line running through town near the Niven Nursery.

Larkspur's early Booster Days celebrations were designed to promote Larkspur, and to raise money for fighting fires. There were carnivals and contests held over several days. In 1910, a dance was staged across from the Blue Rock Hotel, with a band perched on a platform in a tree. This platform had wild roses climbing up walls of chicken wire.

That dance, and subsequent dances, were so financially and socially successful that in 1913, firefighters not only had the money to build their first firehouse behind City Hall, but also had enough money to purchase a half-acre redwood grove on Cane Street for a permanent dance site that came to be named the Rose Bowl. These dances brought in about $75,000 a year and eventually would pay for their first motorized fire engine, a Ford Model T Chemical Engine bought in 1916, a  water system and fire hydrants, a fire alarm system, a fire station, and many other improvements.

The Larkspur Volunteer Fire Department was incorporated with the State in 1913, and became the most prestigious organization in town and the social and political arbitrator of civic affairs. Membership as one of the 22 regulars was a tightly guarded privilege. By 1947, they had completely financed the $500,000 Fire Department. In 1957, the volunteers donated the one-half million dollars in equipment to the city. The Rose Bowl continued to fund the volunteer association until 1963 when the dances were discontinued and the property was eventually sold off. Today the location is an apartment complex next to the old railroad right of way, now a multi-use community path.

LAVF is still in existence today, although not as a firefighting crew. The City of Larkspur FD handles all emergency needs, while LAVF supports the FD and maintains historical memorabilia and equipment including the original 1916 Ford Model T. As of the end of 2015, the non-profit group has been renamed the "Larkspur Volunteer Fire Foundation", and is focused on fund-raising to support needs such as disaster preparedness and historical preservation.

A slide show featuring poster collages made for the LAVF/LFD 100th Anniversary Rose Bowl Dance in 2013 is pictured below. Photographs are courtesy of the Larkspur Association of Volunteers Firefighters Museum collection, scanning by William and Janice Lellis, digital imaging into collages by Maureen Forster. 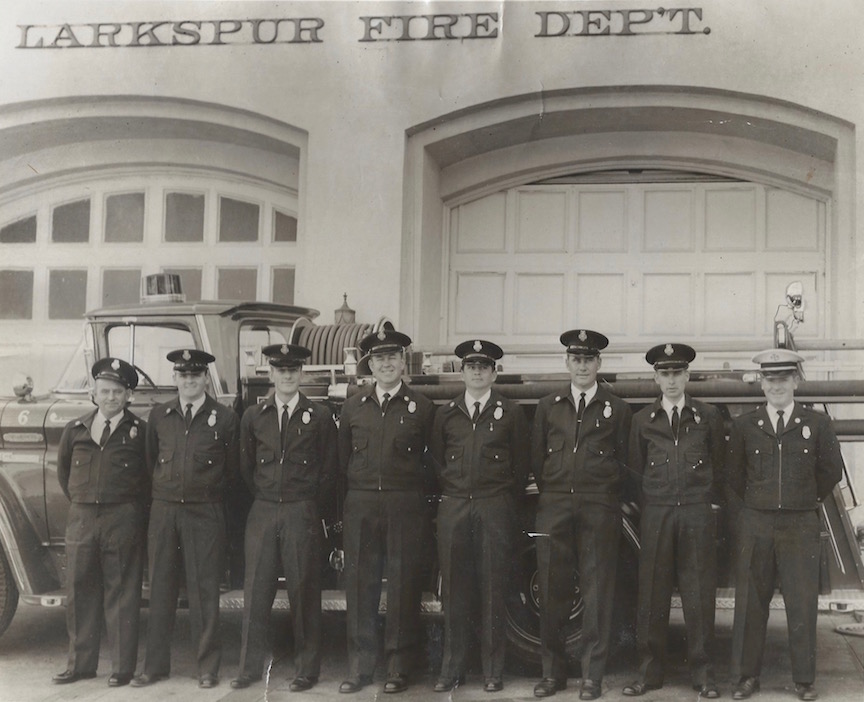 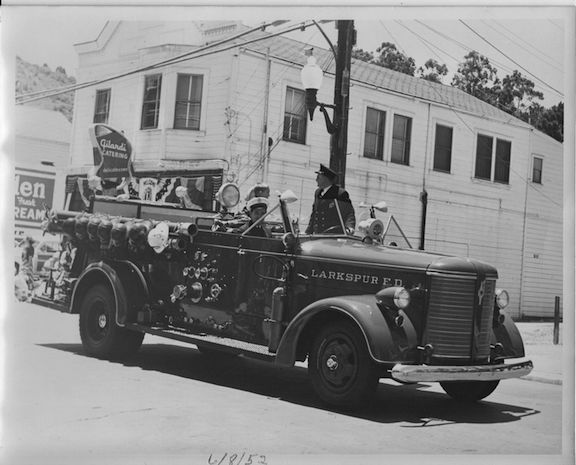 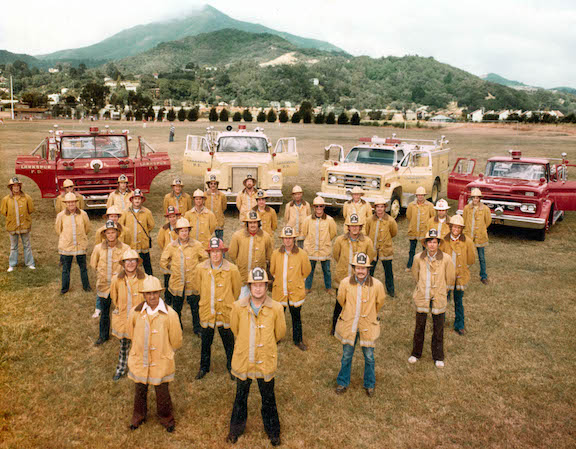 A group photo of Larkspur paid and volunteer firefighters in the early 1980's. Photograph by Roger Archey, courtesy of Larkspur Association of Volunteer Firefighters Historical Museum. 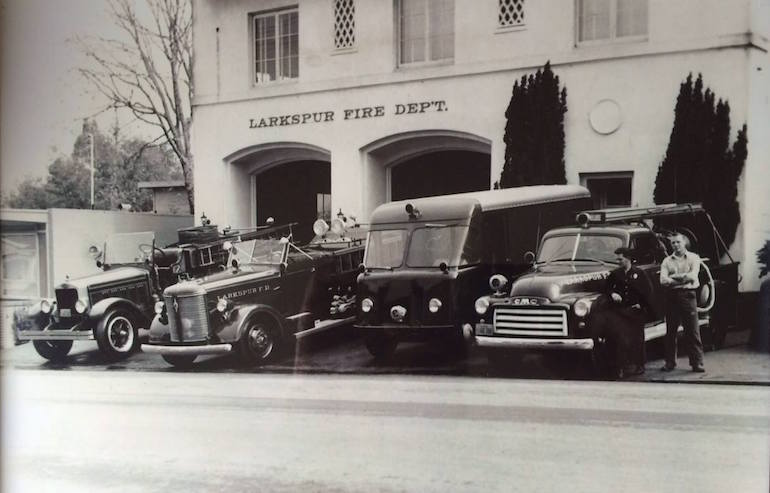 The fire house at 420 Magnolia Ave. in the late 1950's. (l-r) George Bartram, Claire Harder. The station and the 1927 La France on the far left appeared in the Hollywood film "Impact". The 1951 GMC on the far right was donated to Nicasio VFD in 1959.
"Going On a Call"
A film by Jim Niven, background by Bill Lellis and Tom Forster
​
What was going on a fire call like in 1963 in a small town?

To help tell that story, we are thankful to have a 16mm film re-enactment that was shot at Larkspur FD that year, by Larkspur Volunteer Fireman Jim Niven.

Jim was sadly killed in the line of duty responding to a reported structure fire 15 years later. That story is posted in our Line of Duty Death section – see that menu. Another sad coincidence is that the fire engine that rolled over and killed Jim while responding is pictured in this film, and at that time was brand new, numbered Larkspur Engine 7. George Bartram served as the Larkspur Fire Chief at that time.

Today most people can be filmmakers with their phones. Millions of videos are posted online every day. Back then, however, filmmaking was very rare, especially with the public when using 16mm film. 8mm was the much more common format at the consumer level, being cheaper but with lower quality. Most 8mm equipment only created black and white productions, and without sound. 16mm equipment was more expensive, and could be shot in color and with better overall quality.

Jim Niven was 26 years old in 1963, and was following in his father George Niven’s ‘footsteps’ as an amateur filmmaker. We don’t know much yet about the story of Jim’s father, but do know that he filmed part of the construction of the new firehouse built by the Corte Madera Volunteer Fire Department Ltd. in 1930. It was a silent black and white film, and will be featured in a future posting.

In this footage shot by Jim, we will see fire service equipment, methodology, and behaviors that have changed over the past 53 years. This film starts with Larkspur Fireman Ranger Benz receiving an emergency call over the phone in the dispatch center, located on the first floor of what was then Larkspur Station 1, now numbered Station 15, at 420 Magnolia Ave. A dispatch center? Yes, most Marin County FD’s dispatched themselves in 1963 - there was no 911 number to call or centralized dispatch, just a local phone number for citizens that would use. In Larkspur’s case, multiple red ‘hotline’ phones would ring simultaneously in both Larkspur stations.

Ranger Benz would later promote and eventually retire as a Captain in Larkspur FD, and sadly passed away in 2002. His son Roger Benz still serves as a Captain in the Corte Madera FD, the 3rd generation in his family to serve locally. At some point we’ll post a family biography.

You’ll note that after determining the type of emergency and location, Ranger advises the “sleepers” (resident firemen) and the second paid fireman upstairs via an intercom, and then stands up and removes a small brass wheel that will be used in the machine that sets off a fire horn. Fire horn? Yes, no pagers back then either – the off-duty paid and volunteer firemen beyond the sleepers were notified initially by a fire horn, and would listen to the number of blasts to determine the rough location. For a closer look at the Diaphone and Gamewell Box Alarm system, see the City of Larkspur website.

Neil White, father of Skip and Dan White and grandfather to Steve, is pictured driving Engine 7, with Warren Mistron, Director of Larkspur Public Works and Assistant Fire Chief, as officer. On the tailboard are volunteers Roy Tarrico, and Dean Bloomquist.

Larkspur Police Department Officer George Newman drove the Larkspur Police car that follows, along with Officer John Cottle. This fire was what later determined to be arson - there was a domestic dispute where the husband set all of his wife's clothes on fire on their bed. The husband was not charged with any crime – “… this was the way things were back then…”, said Bill Lellis.

Larkspur’s 1951 GMC responded from station to and got stuck in the mud on this fire, driven by Clive Coverdale. That engine was donated to Nicasio VFD in 1969. Bill Lellis, driving Squad 1 to the actual fire, ran it off the dirt road to avoid hitting a tree that had fallen and been cut, with the truck sliding down the hill into a ditch. Nobody was hurt. According to Bill, shortly after that the first Marin County FD engine on the scene ran into the tree and “… it punched through its radiator."

Larkspur Engine 7 and another County engine put the fire out, but the lack of water was a problem…and it pretty much burned to the ground.” The closest hydrant was down on Bon Air Road, several thousand feet away. Gordon Bell, who would later retire as a Captain in Larkspur FD, can be seen in silhouette in the fire footage. There was a 500-gallon propane tank that had fire potential but did not ignite.

Some of the many changes that have taken place in the fire service in the 53 years since this film was made include discontinuing tailboard riding, and improvements in personal protective clothing. The responders are pictured with canvas/rubber turnout coats and helmets, but no turnout pants or boots. In this case Larkspur had what they nicknamed "Skunk Helmets", with the distinctive white stripe down the middle. The first man sliding down the pole has a cigarette in his mouth. Once very common, cigarette smoking is now greatly reduced and often prohibited in the fire service for health reasons.

Open cab fire trucks have been discontinued, along with the general use of small initial attack squads that were once common, with, in this case, a 250 gallon per minute pump. We also see accordion fire hose loads being used, once common when cotton double jacket fire hose needed to dry thoroughly after use, or mildew and rot would set in. Finally, all of the engines pictured were powered by gasoline motors, and had manual transmissions. Today diesel motors and automatic transmissions are typical.

​See the 3-minute film below, click the play button and also click on the small symbol in the lower right between HD and the word vimeo to view in full screen.