The History of the Novato Fire Protection District 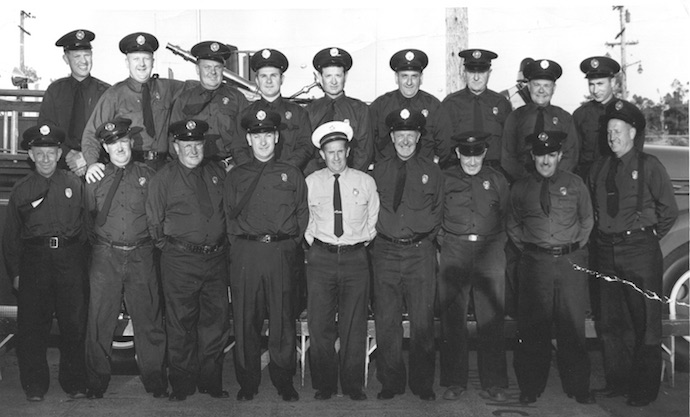 "The Novato Fire Volunteer Department was established in June of 1894. The first members of the department were Chief M. Joseph, Assistant Chief W. Hoskins, Engineer Steven Porcella (who owned the blacksmith’s shop) with Hose Number 1 led by Charles Hayden (who lived at the now Hilltop Cafe) and Hose Cart Number 2 led by Acton Haven (his father was a Judge and also served as the Station Agent at the Novato Rail Depot). The department was organized to deal with the businesses and homes that were destroyed by fire and the ever present danger of grass fires that threatened to destroy the small town.

The Novato Advance ran an editorial on August 19, 1922 written by Mr. Hanen which stated: “Like most small towns, Novato seems to neglect one essential, and that is good fire protection and a wide-awake fire department. A town is always more or less in danger of fire, and when built of wood is sure to be doomed should a conflagration occur. We have a chemical engine, but whether it is constantly kept in readiness or not we are not prepared to say. There should be plenty of hose, buckets and ladders, and a fire drill once or twice a month is really a necessity, so that many can learn how to handle the apparatus and know how and where to obtain it on a minute’s notice. This is a very important matter and should no be longer neglected. One small fire would cause a loss sufficient to equip the town well with fire-fighting apparatus. The time to lock the stable door is before the horse is stolen.”

This is a summary of key milestones and accomplishments since its inception:

In 1926 the Marin County Board of Supervisors granted Township to Novato. Novato officially became a Fire District, and the following year, the Novato Fire District Commissioners were appointed: William Cole, Louis Nave, and Walter Busher, Sr. The District boundaries were formed and the first official Fire Chief was appointed, Charles Kiser. He resigned after 6 months, and Joseph A. Stutt was appointed as the second Fire Chief.

The District’s first motorized piece of fire equipment was a 1923 Ford Model T, restored and for many years displayed at Fireman’s Fund Insurance Company headquarters in Novato. The truck was originally outfitted with a chemical tank when purchased by the citizens of Novato. In 1927, the chemical tanks were removed and replaced with a 160 gallon water tank along with a small fire pump. The conversion was done by a local blacksmith. The Model T was in service in Novato until 1939 when it was replaced with a 1938 Dodge Power Wagon.

In the 1930s the first fire station was built at Grant Avenue and Redwood Highway. There were 17 personnel, 15 of whom were volunteers. Chief Charles Olson was hired to replace Joseph A. Stutt who became a Fire Commissioner. Chief Olson hired Fred Miller as the first official paid Firefighter. Chief Olson retired after 12 years and Fred Miller was appointed Chief.

In the 1950s, a young, energetic, and motivated George Cavallero took over as the fifth Fire Chief. He oversaw the construction of a new fire station in the San Marin subdivision. In 1969 Chief Cavallero died in the line of duty while responding to a structure fire, and Jack Kidder was appointed Fire Chief.

In the 1970s, Measure K was passed by Novato voters providing funding for a new station in southern Novato (Ignacio), the addition of ambulances, and new personnel. In 1975 Chief Kidder resigned and Charles Onorato was appointed as the seventh Fire Chief.

In the 1980s, Chief Onorato resigned and Assistant Chief James Berthinier was appointed as the eighth Fire Chief. The community passed Measure E (Paramedic Tax) and a new fire station was built on Redwood Boulevard. In the 1990s, an additional fire station was built on Atherton Avenue to protect the northeastern zone of the District. James Berthinier retired after 15 years as Chief and 35 years in the Novato Fire District. John Rentz was appointed as the ninth Fire Chief. Upon Chief Rentz’s retirement, Jeffrey Meston became the tenth Fire Chief.

From 2000 on, Chief Meston oversaw the construction of a fifth fire station serving the repurposed Hamilton Air Field, which now boasts a population of several thousand residents. The District also acquired an administrative building on Rowland Way. Engineer Steven Rucker died in the line of duty on October 29, 2003 during the Cedar Fire in Southern California. In 2004 the District opened Station 5 and dedicated the Novato Fire Fallen Firefighter Memorial at its new Administration building.

In 2006, upon Chief Meston’s retirement, Marc Revere became the 11th fire chief. The department became one of only a handful of fire departments in California to become accredited by the Commission on Fire Accreditation International, a part of the Center for Public Safety Excellence. Following Chief Revere’s retirement in November of 2012, Mark Heine became the 12th Fire Chief, and is currently responsible for the construction of the new Fire Station in Ignacio to replace the aging Station 64."